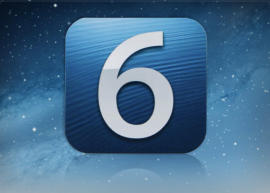 Apple has rolled out the first bug fix update to iOS 6 since the software’s release in mid-September.

Version 6.0.1, which went out as a free update this morning, fixes a handful of bugs, including one that Apple says kept iPhone 5 users from installing over-the-air software updates. Apple’s fix includes installing a special “iOS updater” app to help the process along, which is removed from the device after 6.0.1 is installed.

Also included in the update is a fix for a nasty Exchange bug that could delete a meeting for all invited attendees if one user declined an invitation. The issue could be so bad that some companies put into place specific workarounds, warning those with iOS 6 devices to keep from declining invites and use a computer instead.

Here’s an image of the special installer for iPhone 5 users:

A report from Boy Genius Report late last month suggested Apple had iOS 6.0.1 in testing phases with all of the above fixes, with mention that the company was also at work on a more full-featured release of 6.1 for after the holidays.

As a frame of reference, it took Apple a little under a month to release iOS 5.0.1 following the release of iOS 5 last October. The release brought mostly bug and security fixes, though also added multitasking gestures for original iPad users. The jump to iOS 5.1, which reworked the camera application on the iPad, and increased the size limit for over-the-air app downloads, came about four months later.

According to Apple, iOS 6 adds “over 200 new features” to iOS 5. Chief among them is Apple’s own maps application, changes to Siri that add more information about movies, restaurants, and sports scores, as well as deep integration with Facebook.