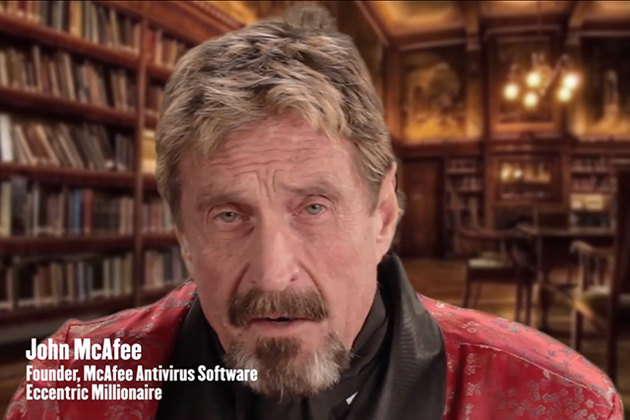 Part-time fugitive and antivirus software founder John McAfee has a new invention he’s working on. After spending some of his time filming a drug-fueled video tutorial to uninstall the antivirus program he helped create, McAfee now believes he can outsmart the NSA. Speaking at the San Jose McEnery Convention Center on Saturday, McAfee unveiled his grand plan to create a “D-Central” gadget that communicates with smartphones, tablets, and laptops to create decentralized networks that can’t be accessed by government agencies.

The gadget might sound like something straight out of a Bond movie, but McAfee wants to build it and sell it for less than $100. “There will be no way [for the government] to tell who you are or where you are,” McAfee says. Effectively, it works by creating small private networks that act as a dark web that’s inaccessible to others. McAfee says he has been planning the technology for a few years, but work on the project has intensified “rapidly” over the past few months. It’s not designed to replace the internet; instead it provides a localized dynamic network where users can communicate in private and share files. It will provide a private and public mode, and McAfee says he’s planning to use public nodes too.

McAfee explains the device is localized and has a range of around three blocks. Everyone in those three blocks can then communicate with each other and that will obviously change as users move in and out of a local area. McAfee says he’s around six months away from a prototype device, and the current one is a round shape with no screens. “We have the design in place, we’re looking for partners for development of the hardware,” he explains, noting there may be three or four varieties of final hardware. The whole project may never make it to retail shelves though, especially if concerns over its use result in a ban. McAfee answered questions over its criminal use by comparing D-Central to the telephone network. “Of course it will be used for nefarious purposes, just like the telephone is used for nefarious purposes.” If the device gets banned in the US, McAfee says he’ll simply “sell it in England, Japan, the Third World.”

While McAfee claims he has developed unique encryption that “the NSA won’t get into it,” the main use for such a gadget might be at college campuses across the US. Napster rose to fame in the ’90s when it used peer-to-peer technology to make sharing MP3s quick and easy. McAfee’s gadget could be used widely to share files at colleges, making it difficult for authorities to police. “I cannot imagine any college student not standing in line to buy one of these,” he claims. While the NSA claims are bold, McAfee is only outlining its use at a high level right now. A clock is ticking on his D-Central website, and we should learn more about the technology in 174 days. Until then, keep your tinfoil hat firmly in place.